This vintage hunt shows just how good Arthur Young was.

In the world of bowhunting there are a few famous people who you know just based on their last name alone. Guys like Fred Bear, Saxton Pope and of course, Arthur Young, are now household names every archer knows very well.

Arthur “Art” Young was a true trailblazer. He was hunting with a traditional stick and string at a time when many others doubted what was possible with the equipment.

Young harvested the usual deer, moose and sheep with his bow. He even took an African lion once. This rare footage taken in 1926 in Alaska, shows Young stalking a large grizzly bear. We didn’t even realize they were filming hunts back then until we saw this! 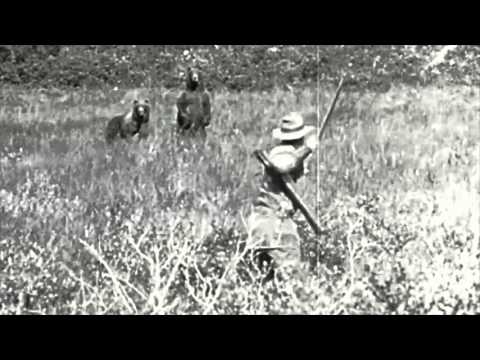 We’ve always heard what a legend Young was. After all, he is one of the founders of the now iconic Pope & Young club. This was our first time seeing him in action and he didn’t disappoint. I’ve never seen someone move so quickly or deliberately on a spot and stalk like that.

As cool as the hunt was, we are equally amazed at just how many bears were in this video. One thing we couldn’t figure out at first was when he pulled the arrow from this bruin’s back. One of our readers pointed out that arrow was likely from the original shot and that Young was simply removing the arrow by pulling it the rest of the way through. What an incredible shot!

In any case, we’re glad they showed a close-up of his arrow at the end. It doesn’t get much more simplistic than that. Looks like a traditional wooden shaft. The broadhead looks like it was homemade. That would make sense considering Young learned his hunting skills from Will “Chief” Compton, who was himself taught hunting skills and bowmaking skills by Sioux Native Americans in the 1860s.

If all the gear he was using here was handmade, that just makes this harvest even more impressive. Our hat is off to one of the founders of modern bowhunting!