Only Jerry Miculek could shoot a Barrett .50 cal this fast.

The Barrett M107 is one of the most powerful rifles in the world. Most people think of this weapon primarily as a sniper rifle. While it is used for that, it is meant to be an anti-material rifle, made for punching through armor and disabling enemy vehicles.

While the Barrett is semi-automatic, most people do not try to rapid-fire a rifle this large. Mostly because this rifle has an insane amount of recoil that makes it difficult to get back on target quickly.

That is, unless your name is Jerry Miculek. The world champion shooter is fast on the trigger no matter what kind of weapon he happens to be holding. In this video, he pops off six rounds from a Barrett .50 cal in less than a second. You simply must see it to believe it. 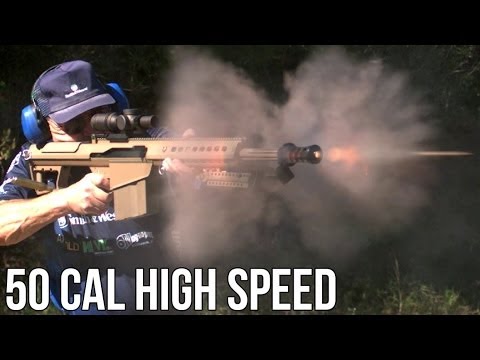 For a moment there, this gun sounded less like a Barrett and more like a Browning machine gun. This demonstration broke Miculek’s own record for this same feat. Most people get slower with age, we think Miculek might be getting faster!

This is one of those records that when you see it written on paper, it seems physically impossible. How can someone’s finger move that fast? How can someone soak up that much recoil like it is nothing and keep firing that fast? We’ll never know, but it sure is impressive to watch it happen.

If you were not impressed by the speed, you had to be by the accuracy. That was one incredibly tight group for such a fast-shooting demonstration. You can better appreciate those skills on the high-speed replay that better shows the movement of the bolt, the effect of the recoil and Jerry’s adjustments to get back on target. It just goes to further prove Jerry’s incredible talents and control skills when using a firearm.