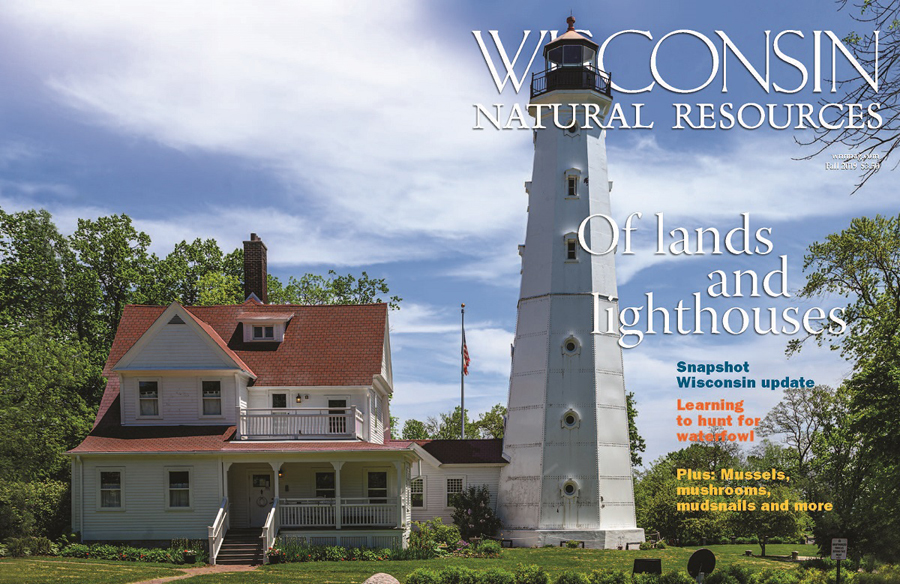 The cover of the fall issue features a wrap-around image of the North Point Lighthouse in Milwaukee.Photo credit: DNR

MADISON, Wis. – With two Great Lakes in its boundaries and miles of shoreline, Wisconsin has more than 50 lighthouses, including three on state properties and several with crucial connections to the Department of Natural Resources. Those scenic and historical gems, from the urban setting of Milwaukee to Door County and the Apostle Islands, are featured in expanded coverage of “Landscapes and lighthouses” in the Fall issue of Wisconsin Natural Resources magazine.

Also in the Fall issue is a story about DNR biologists’ conservation work involving native mussels, which fits right in during this Year of Clean Drinking Water. As a bellwether of water quality, native mussels are a vital natural resource.

Other water-related stories include the tale of a teenage volunteer helping to battle invasive New Zealand mudsnails and a recap of a promising research project at Elkhart Lake aimed at reducing excess phosphorus and reigning in toxic algae blooms.

Autumn is a great time to head north to try to catch a glimpse of elk from the state’s growing herds. The magazine offers an update on elk in Wisconsin following years of relocation efforts by the DNR and many partners.

For waterfowl hunters, there iss an inspiring story about a Learn to Hunt event at Mead Wildlife Area. Also for those who like to get involved, an update on the Snapshot Wisconsin trail camera program shares ways to “lend an eye” for wildlife.

A short story and several photos highlight scenes from a new accessible fishing pier in Chippewa Falls, while another photo page captures colorful mushrooms found after a storm. The magazine’s regular “Back in the day” feature recalls how picking milkweed was patriotic during World War II.

Wisconsin Natural Resources magazine is published four times a year and is available via subscription for $8.97. Call 1-800-678-9472, or find stories and subscribe online at wnrmag.com.