If it wasn’t for the help of three horses, this deer would’ve been bear food.

Mother Nature can often be brutal, offering food for one animal at another’s expense. But every once in a while, the prey gets the upper hand–or in this case, a helping hand.

In a clip coming out of Alberta, Canada, we see a grizzly bear preying on a deer that stands little to no chance. However, a group of horses come to the rescue in an unusual act of generosity, and fortunately this footage captured all of it.

Watch the video below: 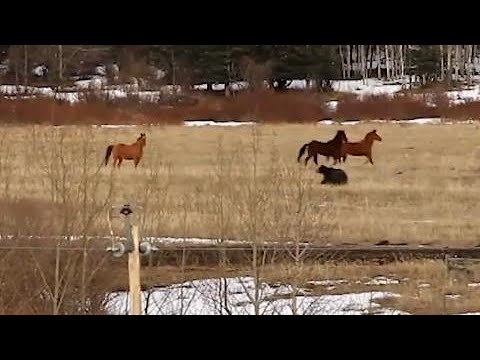 As sentient beings, humans frequently feel an obligation to save other animals from danger, but we don’t expect many other species to have the same impulse.

Who would’ve guessed horses could be so fearless? I think back to all the times I’ve walked into a pasture only to watch horses bolt in the other direction, and I’m certainly not as intimidating as a fully grown grizzly bear.

It’s fortunate the bear decided to keep moving, too, as a horse could also find itself in a world of trouble with a bear.

Like anything in life, though, we’re always stronger in numbers, and three horses were enough to make this bear dip out.

Have you ever seen anything like this? Let us know!