Texas – -(AmmoLand.com)- What could have been a much worse tragedy inside a White Settlement, Texas church Sunday was quickly stopped by good guys with guns, who not only fatally shot the gunman but got quick support from several other armed church members, as seen by examination of the streamed video, which has since been taken down.

The shooting incident left three people dead, including the shotgun-wielding killer. NBC News said two members of the congregation died at the hospital.

By watching the 51-second video that streaked across social media, one could count at least six other members of the congregation who appear to have drawn sidearms, including one woman. All carefully moved in to cover the downed gunman, while taking care to move bystanders out of the way and not cover one another with their guns. The parishioner who clearly fired the shot has been identified as Jack Wilson, president of On Target LTC, LLC and a candidate for public office. He went on Facebook hours after the incident to tell his story.

According to Fox News, two church members shot the gunman although in the video it appears only one parishioner fired. There were three audible gunshots on the video. Other members of the congregation were diving for cover as the shots were fired over the course of four to six seconds, as shown in the 51-second video of the incident that has been circulated online. Two other people were reportedly injured in the chaos while ducking for cover, but they were treated and released.

“I am grateful for the church members who acted quickly to take down the shooter and help prevent further loss of life,” the governor said. “Cecilia and I ask all Texans to join us in praying for the White Settlement community and for all those affected by this horrible tragedy.”

Statement on shooting at West Freeway Church of Christ in White Settlement: 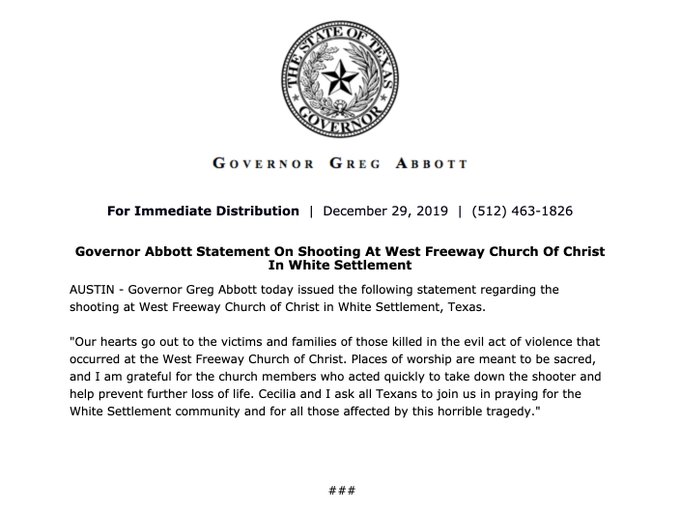 1,539 people are talking about this

The shooting occurred at the West Freeway Church of Christ.

According to the Dallas Morning News, Jeoff Williams, regional director for the Texas Department of Public Safety, praised the actions of the armed citizens. His agency will lead the investigation.

“I would like to point out that we have a couple of heroic parishioners who…saved countless lives,” he told reporters. “Our hearts are going out to them and their families as well.”

The video is graphic, and the Dallas Morning News said it was quickly removed by the church but not before it was viewed by an unknown number of people. The video showed the gunman, wearing what appears to be a hooded jacket, get up from a rear pew, approach one man in the rear corner of the sanctuary and apparently ask a question before pulling what appears to be a shotgun from under his coat.

At that point, a man seated at the rear of the sanctuary, stands up and appears to have a bit of trouble drawing a concealed handgun. He is the first person shot by the gunman, who then turned his gun on the first man he spoke to.

The gunman then turns and moves down a wall-side aisle. A second armed church goer can be seen at the upper left of the video drawing and firing, and the gunman immediately dropped to the floor as other armed parishioners closed in.

A gunman killed two people during a Sunday-morning service at a church in White Settlement before members of the congregation fatally shot him, authorities…

23.9K people are talking about this

O’Rourke’s presidential run crashed shortly after he declared during a Democratic debate in August, “Hell, yes, we’re going to take your AR-15, your AK-47.”

However, there did not appear to be any immediate reactions from gun control organizations. The gun prohibition lobby is routinely silent following an incident in which armed citizens intervene.

However, Alan Gottlieb, founder and executive vice president of the Second Amendment Foundation, was not so tongue-tied.

“The fact that so many other church members were also armed, and did not open fire, demonstrates how responsibly armed citizens can perform in an emergency,” Gottlieb said. “The video belies the oft-repeated myth that armed citizens are irresponsible and even dangerous to one another, which is something we address in ‘Good Guys With Guns’.”

“We don’t know what motivates someone to open fire on a peaceful church congregation,” Gottlieb said. “But thanks to the video, we know what stops them.”

Dave Workman is a senior editor at TheGunMag.com and Liberty Park Press, author of multiple books on the Right to Keep & Bear Arms and formerly an NRA-certified firearms instructor.