From many perspectives, white-tailed deer are a very important part of the Wisconsin landscape and culture. Deer are a wonderful and troublesome part of Wisconsin, depending on your point of view. Wisconsin’s deer herd is managed by setting three-year population objectives for sections of the state called deer management units. While someone will always want more or fewer deer in a given area, the DNR must look at the big picture in attempting to keep deer numbers within a range that is both ecologically responsible and acceptable to most Wisconsin residents. Ideally, the population objectives proposed by wildlife managers and County Deer Advisory Councils will produce a healthy heard, a robust ecosystem, few deer damage complaints and good hunting and wildlife watching opportunities for anyone to enjoy. 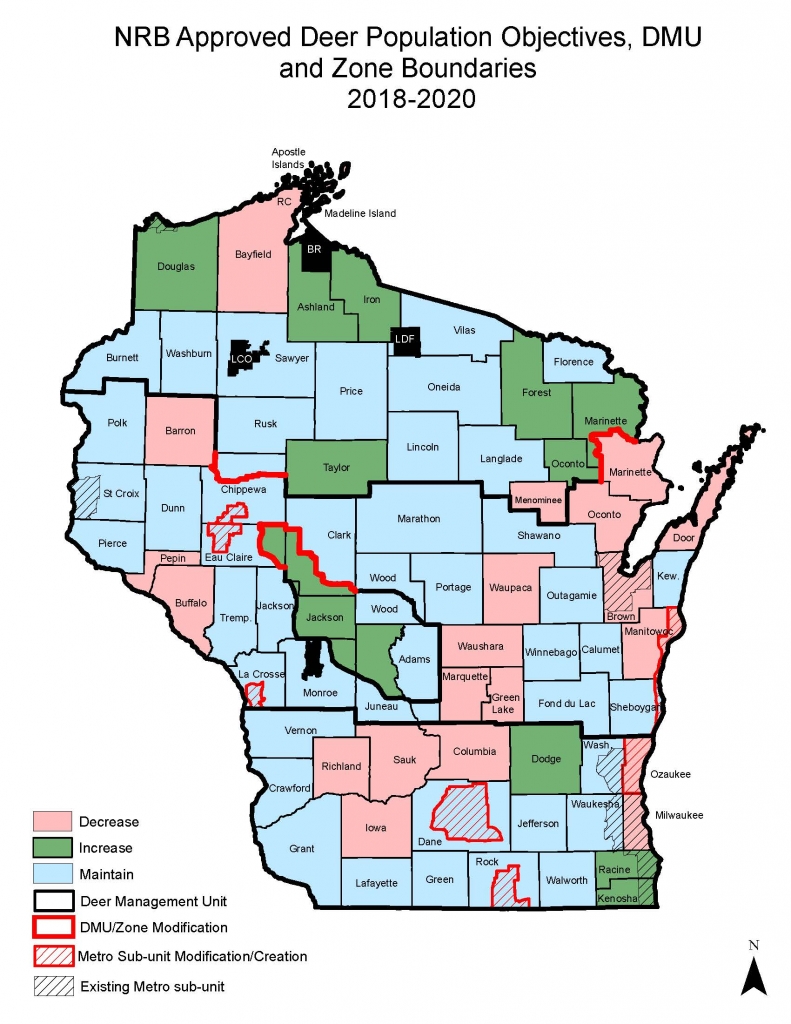 Click here to view a larger PDF.
Population monitoring and research
Since the early 1900s, Wisconsin state officials have been tracking deer populations and harvest. As technology and scientific methods have advanced, population and harvest data has become more accurate and readily available. Wildlife biologists closely monitor deer population dynamics so they can then estimate the numbers that may be harvested to keep populations at healthy levels that are socially acceptable to both hunters and non-hunters alike.
Deer population metrics
Monitoring surveys
Sex – Age – Kill model
SAK VideoThe Sex-Age-Kill (SAK) population model is used by the DNR to estimate the number of deer in Wisconsin. SAK estimates help determine how many bucks and antlerless deer can be harvested each year during the hunting season in order to make the population increase, decrease or stay the same. SAK is based on a robust dataset including the number of bucks harvested each year and the ratio of fawns per doe observed each year.

Deer health
Winter Severity Index
The winter severity index (WSI) is a measurement to help gauge the effects of the winter weather on deer survival. The index was developed in the early 1970s and is calculated by adding the number of days with 18 inches or more of snow on the ground to the number of days when the minimum temperatures were 0 degrees F or below. In general, the severity of the winter is based on the total number of points accumulated over the collection period. A winter with an index of less than 50 is considered mild, 50 to 79 is moderate, 80 to 99 is severe and over 100 is very severe.

Annual harvest plans take into account the WSI totals, as this index provides insight into the number of deer that may have been lost due to the weather conditions. Deer have both physiological and behavioral characteristics that allow them to survive Wisconsin winters, provided the harsh conditions do not persist for long periods of time. However, in very severe winters, up to 30% of the deer herd may be lost, dramatically affecting the overall populations. The WSI is calculated for 34 locations throughout northern Wisconsin. Collecting WSI information at these many locations allows biologists to manage deer populations at a localized level where differences in weather conditions between stations can be dramatic. WSI data is not collected in the southern portions of the state because the milder conditions do not impact the deer herds as significantly there.

Damage and nuisance deer issues
Wisconsin has programs designed to help farmers and other residents when deer are damaging crops or property, or when they become a safety hazard.
Deer Advisory Committee
The Deer Advisory Committee is a diverse group representing government agencies, non-governmental organizations, tribal interests and conservation groups.